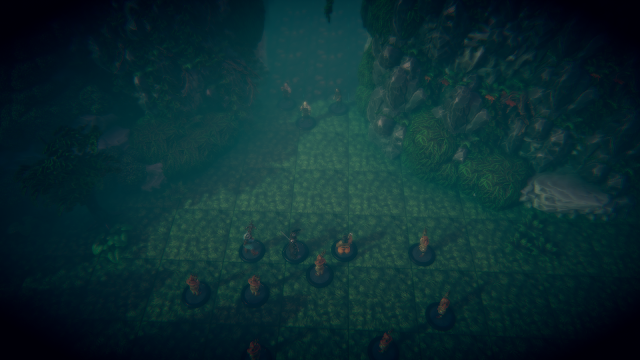 When last we left the party, they had returned to the town of Caelfall after being overwhelmed and robbed by bandits on the road. One thing I may have forgotten to mention in the last journal was that the party did see the kidnapped merchant family in the back of the wagon. They noticed the family as Wymarc the Halfling's goods were being thrown in the back of the wagon with the prisoners.

The party stumbled back into to town bleeding and wounded and without the goods they left with. The guards merely laughed or shook their heads at the party as they returned. They had seen this all to often. In fact, if you came back with your lives at all, you were lucky. Many merchants in town had been kidnapped and ransomed by the bandits over the last few months.

The party limped through the gates and immediately went to the local cleric who serves The Church of Xvár. They Rodigan the Human Fighter played up a persona of justice which the Cleric Bavárd sympathized with. Bavárd healed the party free of charge and offered to join the party should they seek to bring justice to these bandits plaguing the road. The party inquired of Bavárd the Cleric in regards to the kidnapped merchant. He recognized the merchant as, more than likely, Girvious, merchant who had left town early that morning to his new homestead.

"His sister is Evette, a widow here in town who runs a bed and breakfast out of her home," the cleric said.

With this info, the party visited Evette and told her the sad news of her brother, sister-in-law, niece, and nephew. Immediately Evette offered the party gold.

"The town guard are useless, see what local men you can hire to bring justice to these bandits and rescue my family."

With gold and a cleric on their side, the party then visited the tavern. Rodigan stood on a table and delivered a rousing speech about protecting the town and bringing justice to the bandits (winking at Darion and Brishoff every now and then because they all know they are really actually scoundrels themselves). This speech (and the promise of gold) rallied 10 townsmen to their cause to clear out the bandit lair.

"We leave first thing in the morning!" Rodigan said.

Early the next morning the party, the cleric, and the townsmen gathered at the town gate. They made their way to the northeast of town mad tracked some wagon tracks through some woods. The trailed ended at the foot of a cliff. The party scoped out the location and found 2 cave entrances, both of which were guarded. After watching the patterns of the bandit watch for a whole day, they counted that at least 17 to 20 bandits were in this gang. They also observed an elven female who seemed to have some kind of leadership position in the bandit gang.

The next day, after almost a full day of recon in the day prior, the party devised a plan. Darion the Thief and Rogigan the Fighter would pretend to be drunk and approach an entrance in order to lure any bandit guards away and into an ambush led by Brishoff and Bavárd.

The party stripped the slain bandits of their chainmail and gear and began wearing it as their own in order to be better disguised. They slowly made their way through the lair, ambushing bandits as they crossed their paths and stripping them of their mail and clothing to outfit their party and followers. They also captured the female elf they saw the day before giving orders as well as human bandit who surrendered. Eventually they made their way to the prison in the back of the lair and there they found the merchant Girvious and his family locked in crude cells. They released them from their prisons and also saw female locked in a cell. She tried to pretend that she too was a victim of the bandits, but the party learned from their elven prisoner that this female locked in a cell was a part of the gang. She was locked in the cell awaiting punishment for stealing from the gang.

This human female bandit offered to help the party take down the bandit leader in exchange for 10% of the loot in their coffers.

"The leader of this gang once was a champion in the gladiatorial pits of Ironhaven. He won his freedom through combat," she said.

The party then made their way to the leaders chambers in the lair. They sent the female bandit in to lure them out. It worked as well! The party ambushed the leader and his other lieutenants a slew them. The party took the head of the leader and the right hand of every bandit they slew as proof for a reward back in town. They found some magical weapons and armor on the bandit leader and in his chamber (some +1 weapons and armor). They also received massive amounts of gold, silver, and other valuables from their treasure horde as well as a nifty magical lantern. They gave Girvious back his wagons (same with Wymarc) and gave them a share of the loot as well (see they play the scoundrels but they are not that bad of guys).

They returned to town as heroes. Not a single townsperson that volunteered to fight with them was lost or injured. They received their bounty reward from the guards and went to the tavern to buy rounds of drinks and celebrate their victory and revenge on the bandits. Bavárd the Cleric gave Brishoff the dwarf a scroll with runes as well.

"I have a devout faith in God," he said, "but I am also curious in the beliefs of others. This is of your druidic tradition and will probably be of better use to you than me."

As they celebrated, the guards approached them.

"The town mayor wishes to speak with  you at your earliest convenience."

They guards seemed serious and dour as they delivered this message.