This is a hand drawn map from my notebook that I scanned and put a hex grid over. The area is called "Eldeskland." 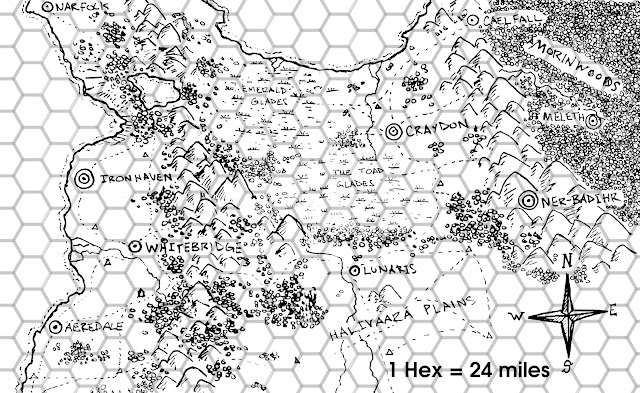 I am currently running this campaign in Basic Fantasy Roleplaying and I am using the Chaotic Caves adventure (though it is heavily modified). I like sandbox games where I drop the players into a world I honestly have not fleshed out. I only add specific details as the characters travel to certain places or follow various rumors and hooks I scatter about.

The adventure begins with Darion the Human Thief and Rodigan the Human Fighter (partner ne'er-do-wells) who tried to rob Brishoff the Dwarven Druid. They quickly learned that Brishoff was a poor penniless traveler and had absolutely nothing of value. Brishoff is in fact fond of drinking and is not the most "pure" of druids so he actually got along well with his would be robbers. They befriended each other and continued their travels together north towards the border town of Caelfall (pronounced like "sail fall"). This is how I like to start a lot of my campaigns now. None of this intro was roleplayed out. I merely asked my players (since I can be lazy as a GM) to figure out and come up with a reason as to how they know each other. I don't like railroading them into a quest or deciding for them why they are together as a party. I would rather have them decide amongst themselves how they know each other given the parameters of the world I have given them.

We started actual play with the party entering the town of Caelfall and getting suspicious looks from the town guards. The party, as most parties do, went to the tavern first in order to get a full tankard and listen to rumors as well as look for work.

They asked around and heard rumors about how the city guard are arresting outsiders for petty crimes.

"They are arresting people, but the dungeons seem to never be full!"

They also learned that orcs, kobolds, lizard folk and other monsters harass travelers close to town and that there has been some activity at some tombs to the south east. People have gone missing there.

Suspicious about this issue with the guards, Darion and Rodigan decided to investigate by trying to break into the towns longhouse (below which the dungeon is located). They were unsuccessful and felt they were sneaky about this (they were in fact, not). The next morning they met a halfling merchant who was looking to send a wagon of resources to his cousins who lived on a homestead in the dangerous woodlands beyond town.

The forest of Morinwood (hehe) is ancient and old and at one time, the kingdoms of men had expanded into them. Those kingdoms fell and the ruins of these old kingdoms were reclaimed by the forests... as well as monsters. The halfling, Wymarc, had heard that bandits were robbing travelers outside of town and hired our "heroes" as guards.

Six miles outside of town, the players ran across two wagons. One was a covered wagon (like a medieval mobile home) and the other was an open wagon with a tarp draped over the back. Both were on the sides of the road.

These were bandits who had just seized the wagons of a merchant who was moving from Caelfall to a new homestead he had purchased. He was moving his entire family and business to their new home when they were attack by bandits, tied up, and thrown as prisoners into the covered wagon.

The party saw these wagons from far off. They had Darion and Rodigan get into the back of Wymarc's wagon in order to hide and threw a cloak over Brishoff, hoping the dwarf would pass as a halfling like Wymarc. Wymarc hailed the bandits as they approached and Rodigan told Wymarc from the wagon to ask them who they are.

"Oh we are merchants from Caelfall," they replied.

Wymarc did not recognize these "merchants."

Rodigan gave Wymarc a bogus name and told him to ask these "merchants" if they work with that person.

"Ah yes!" they said, "he is our best business partner."

At this, the party knew they were bandits. Darion and Rodigan leapt from the back of the wagon, surprising the bandits. Brishoff threw off his cloak to reveal he was in fact a dwarf. The bandits were surprised and the party received a surprise round which... they didn't roll well on. The bandits had the same trick as the party though, but better. As soon as it was the bandit's turn, more bandits flooded out of both wagons. A whole gang was hiding in both wagons just like the party. The party of three level one characters were facing off against nine angry bandits.

The party put up a good fight, but the sheer numbers were against them. Brishoff and Darion were incapacitated and the party only managed to kill one bandit. The bandits offered a deal though.

"We will let you leave with your lives if you give us your wagon, pony, and all of the goods in the wagon."

"This is a fair deal," replied Rodigan.

The party and Wymarc limped back to town to lick their wounds. They wanted revenge...