Well it's been a while since I updated this. Apologies as I have just been very busy but I think it is always fun to recount these stories and remember them so I will do my best to make sure there is more frequent updates with this. This will will be a collection of a few sessions, I believe, condensed into one post. 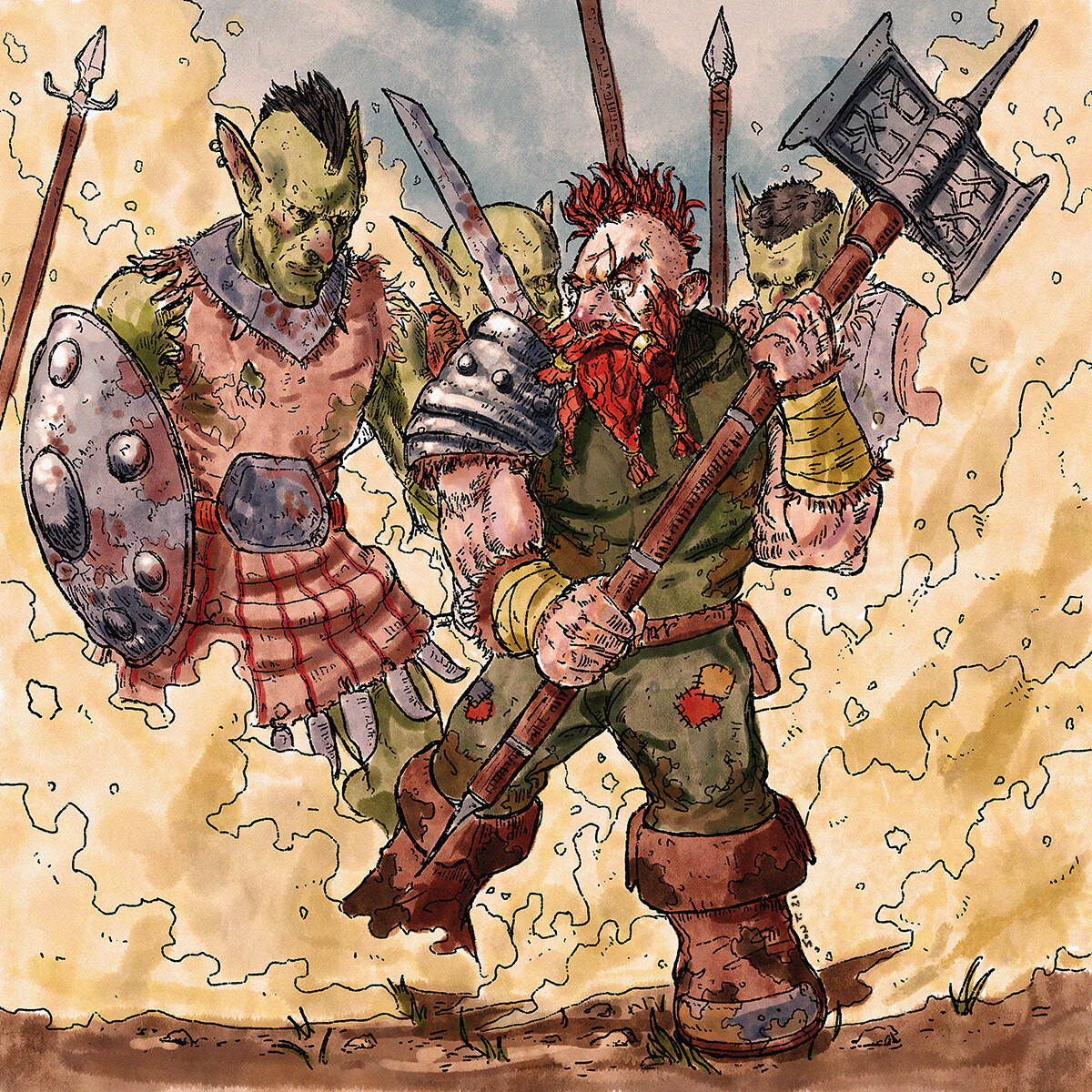 When last we left our group of adventurers, they were summoned to see the mayor of Caelfall in the town longhouse where judgments and rulings are passed. Upon entering the long house, the mayor told anyone within, save for a few trust worthy guards, to leave. It was just Rodigan the Human Fighter, Brishoff the Dwarf, and Darion the Human Thief with the mayor and a few guards.

"You seem to have some skill with dealing with problems. I have heard of your victory over the the bandits plaguing our roads," said the mayor. "I have proposition and what I am about to tell you cannot leave this room. We are being extorted by two Orc tribes. They outnumber us and could take over Caelfall if they wished to. They have not because I offer them prisoners as slaves. You no doubt have heard that outsiders have been punished harshly for any infraction and that our dungeons are never full. This is all true. Such individuals are sent as payment to the orc tribes as slaves in order for them to leave us along. I wish to ask you to take care of these orcs and free our town. As payment, I am prepared to offer each of you 300gp."

The party looked at each communicating silently about whether or not they should receive the offer.

"I see you are hesitant to take this job. Consider this then. The town guard reported to me how you attempted to break into our long house here. Such an infraction is against our laws and should you not accept, I will simply make you the next offerings to the orcs."

A couple sessions back, Darion did fail his move silently check and lock picking check when they were trying to break into the longhouse to get to the town dungeons when they first heard rumors of people being arrested and the dungeons never filling up.

"We accept," they responded.

The mayor specified how the bandits the party captured alive (the human and elven bandit) would be used as the latest offering to the orcs. The party elected to follow the mayor and a few town guards who were escorting the prisoners to the exchange at a distance and would follow the orcs back to their lair in order deal with these tribes. The party followed the mayor and a few guards to some old ruins where two groups of orcs awaited. The exchange was made and the orcs seemed very interested in the elf. "Oh an Elf! Good job," the orcs said, "When we saw you from afar with only two slaves, were prepared to consider the arrangement forfeited."

The party watched for a time and noted how the orcs, during the day, stayed out of the sunlight and to the shade of the cave entrance on both sides. Seeing this arrangement, the party had an idea. "What if we start a civil war?"

Rodigan and Darion elected to lure the guards out of the cave. Orcs do not like the sun but seeing movement in the tree line in front of them prompted the leader at the entrance to send some guards that way. The party ambushed the orcs in the woods and stole their orc gear. The party noticed an orcish symbol painted in white on their armor. They put on some of the armor and used some of the bows with orcish arrows to lobby some arrows at the other entrance. The orcs of the other tribe took notice and saw figures in orc armor with the symbol of the other tribe shoot arrows at them and retreat towards the other entrance. These orcs at the other entrance took the bait, gathered their weapons and moved with violence in mind towards the tribes entrance. The party watched as the guards of both entrance fought and slaughtered one another. The orcs of the tribe the tricked with a lobby of arrows appeared to move back towards their entrance. Minutes later, the party heard violence from within the caves. Sounds of combat and orcish death howls resounded from within.

After some time the party elected to enter the caves and explore. They encountered a few orcs in the cave system and dealt with them swiftly. Eventually they stumbled upon a temple to some evil orcish god. Within the the temple were many slain orcs from both tribes. Some surviving orcs of the winning tribe were in the process of sacrificing the human bandit the party caught on the altar to a large idol with gems for eyes. It was huge, carved out of black volcanic rock. The human bandit was disembowled by an orc and his blood and viscera were splattered on the idol. The dark stone idol seemed to absorb the blood and a faint glow appeared in the jewel eyes for moment. Lined up next was the elven female bandit they had captured and a dryad.

"I hate you, but I'm glad to see you three," the elf said. "This dryad says she has a husband not far from here. That if we return her to her home and husband, that we will have rest and safety."

This sounded good to the party as they were somewhat injured from their sporadic encounters with orcs in the lair. The Dryad led the party and the elf to a glade. In the center was a tree. It was a magnificent tree and the tree the Dryad was linked to. As the party entered the glade they heard a voice come from the tree, "welcome and thank you for saving my wife friends."

Embedded in the tree was an elven male. His flesh and the tree appeared to be grafted together as one. The party learned that he was an ancient elven druid. He couldn't even remember how old he was. He gave the party a rose that would glow in the presence of evil as a reward for rescuing his dryad wife. The party learned from the female bandit elf they rescued that there were still more orcs left in the lair and that one chieftain now reigned supreme there. The party elected to rest for the evening in the glade of the druid and dryad and head back to the lair to clear it out the next day.

And that is where we will leave that.