This is a journal for a solo game I plan to do every once and a while with the goal of fleshing out the world I am running for my players in my BFRPG campaign. It's also an excuse to play BECMI/Rules Cyclopedia D&D which I am very fond of. This journal entry is of "Warwick the Fighter". At least until Warwick dies a horrible death from a ferret in this story. Here are the basic stats of Warwick. They were rolled with 3d6 down the line. I used the rule of reducing a score by 2 to increase another score by 1.

He is equipped with various goods needed for his journey. He wears chain mail and wields a "Normal Sword" which was a gift from his father before he set out. He has 3gp on him as he leaves the village of his youth. Warwick is from the village of Narfolk in the north. He heard of war to the south with the sultanate and wanted to lend his sword arm to the cause. He is 21 years old, with black hair and brown eyes. Below you can see the map for the adventuring area. Each hex is about 24 miles. I am using my various generators such as my Settlement Generator to determine population, economic specialty, law level, etc., for settlements that are encountered. My Dungeon Generator will be used for any subterranean exploration. 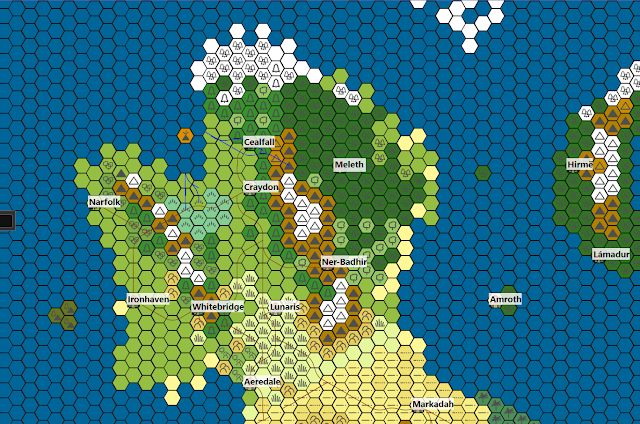 Warwick bade farewell to his mother and his father as he set out from Narfolk, heading towards the southern city of Aeredale where he heard he could join the allied armies of the Northern Kingdoms as a recruit. He wanted to fight in the wars to defend his homeland from the southern armies of the Sultanate, ruled by King Sundosiaya.

A day outside of Narfolk, Warwick attempted to set some snares but was unable to catch anything. As he continued to travel, he ran into a Giant Ferret. It hissed and growled at him in a very defensive manner. Warwick extended his hand in order to calm the beast and with another hand drew his sword. The sudden movement of his hand was enough to anger the ferret and it attacked. Warwick won the initiative and swung his father's sword. This attack was ineffective (he rolled a 2) and the Giant Ferret easily recoiled in a natural defensive manner. Warwick was over extended and the Giant Ferret quickly lunged at him towards his throat (the ferret rolled a 19). It sunk its teeth into Warwicks neck (dealing 8 damage) and removed a rather large chunk.

Warwick fell back, grasped his throat and bled out there on the side of the road. Hopefully his body was eaten by wolves. This way his parents can believe he died in battle with the warriors of King Sundosiaya instead of by a wild Giant Ferret that ripped his jugular out. Life is rough, cheap, and short in the world of the OSR. Time to roll up a new character and die again.