On my Guilded server I started doing a west marches style game of Classic Traveller. We are calling it "The Third Broperium".

We are using the Facsimile Edition along with a few supplements like mercenaries and others. I'm also using a bit of Mongoose Traveller to add a bit more modernity to the game as far as equipment is concerned (The Supply Catalogue).

It's a mercenary/military campaign where my friends on my server can join in about 1 to 2 hour games. The premise is that the players are a group of soldiers, either enlisted in the military of The Third Imperium or mercenaries. They are serving on the SS Gavin which is a lightening class frontier cruiser patrolling the Bascoj subsector. 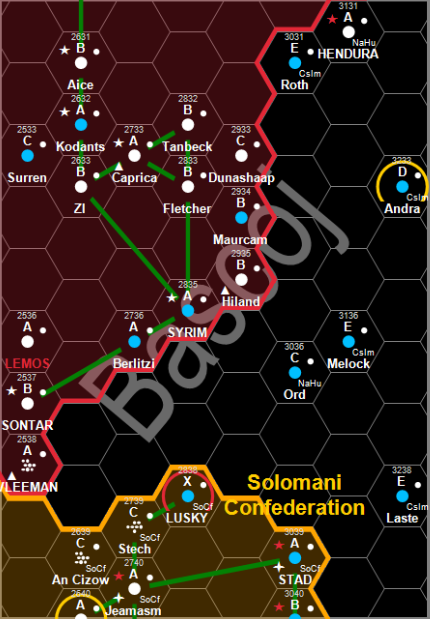 The first mission was on Vleeman, a belter territory owned by the imperium along the Solomani border. The players had the following initial mission brief: 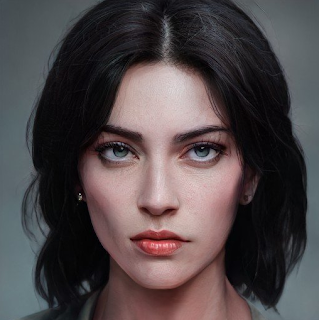 Clara Drieth
Klara Drieth is an administrator over the R&D at Instellarms LLC.. Instellarms manufactures many small arms and ammunition for the Imperial Military Services and as such, Ms. Dreith has access to high security information regarding bleeding tech weaponry for our forces and military arms trials. Rescue her. If rescue is not an option, elimination is permitted

We had the following characters answer the call of this first mission who serve on the SS Gavin:

The squad was briefed on the situation. Klara was abducted, they needed to get her back or at least keep her from falling into Solomani hands permanently. The squad took a shuttle from the SS Gavin to the planetoids of Vleeman. There they met a local law encorcement officer who further briefed the characters. He noted that the building the suspected Solomani terror cell was operating out of has been abandoned for years. They suspect about a dozen armed men. Weapons are not allowed to be open carried on Vleeman so the characters were given documents specifying they were carrying on "imperial business." They were told that the building was about 2 miles away from the port and police station.

The characters traveled a ways through the blue collar manufacturing sector of Vleeman. They got some looks from potential spies but the tactics of William Moore kept the squad from being discovered. They arrived at the building on the colony and noted that a man seemed to be loitering on all four sides of the building and that there were two doors per side.

William and Tony approached one of the men and attempted to talk to him and get him to leave. The man flashed an auto pistol and told them to get lost.

Yeah, this is the place and these are bad dudes.

The two retreated a ways and took cover. Shane then got this guy in his sights with his rifle (which had electronic sights). He landed an amazing shot incapacitating the man.

I made some checks to see if the other 3 guards on the other sides heard anything. Nothing was heard by them so the squad moved in. Shane finished off the downed man with his cutlass. Shane then took the left corner of the building while Tony and William to the right. Through comms, they timed their shots and took out there respective bad guys on either side of the building and then pincered the guard on the opposite end. All the while they were silent (they used suppressed rifles and handguns for this). 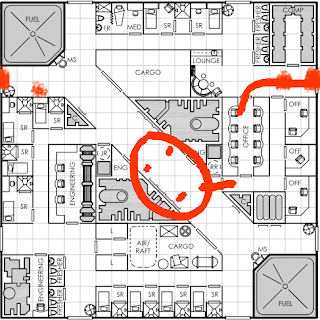 They then circled back around their respective sides of the buildings. Shane entered the building from the top left, William and Tony from the top right. Tony listened at his door and heard a voice. He kicked the door open and both he and William downed two insurgents with their weapons. Shane was lucky to not encounter any guys on his side but saw down the long diagonal hallway that 3 insurgents were posted up and talking in the hallway.

Tony and William heard voices on the other side of the office doors. They kicked the door in, again gaining surprise on their opponents. Within was miss Drieth in a chair flanked by two insurgents. An insurgent leader of this terror cell was speaking to her from across the table. It seems they were having a heated discussion. Instantly William turned the insurgent leaders head into red mist while Tony downed one of the guards. The second guard couldn't land a shot before he too was gunned downed. They were able to grab Miss Drieth just as the three guards in the hallway saw something was going on.

Those guards rushed into the room but the squad had already vacated the building like ghosts.

They brought Klara back to the station without any further confrontation. She was very thankful and said if the group needed anything in the way of arms and ammo, she may be able to help. They boarded the shuttle back for the SS Gavin with a successful first mission under their belt.

Classic Traveller is a lot of fun. It's a little quirky but it's a totally different flare and flavor than what I have played before. This was a first time for all of us playing. For me and for every player there. We all liked the deadliness I think, though they realized that they were taking out insurgents quickly but that the same could be done to their characters very easily. All in all I'm glad I did this and I like running it in this west marches style of short episodic adventures of a ragtag crew of mercs working for the Empire. More to come I hope.