So my players have decided to pursue and rescue the princes of Craydon. The fact that land and title is being offered in exchange for her safe return might also be a prime motivator. The players set out East towards the mountains early in the morning after the confrontation with the vampires in the palace. Their day of travel was full of scattered showers. For the record, I use my journey events supplement which is adapted from Adventures in Middle-Earth. Later in the afternoon, Brishoff, Darian, and Rodigan encountered a group of 6 wolves. Brishoff (a druid) used his ability to calm and befriend animals. He was able to calm and befriend one wolf who protected him with its life. 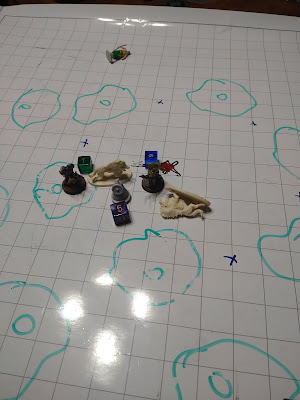 The wolves charged the PCs and their wolf ally. Snapping jaws and growls filled the forest with the sporadic whimpers of the dying canines. The party, despite losing their wolf ally, handled the wolves well through a few rounds of combat. 4 wolves were killed rather quickly with 1 wolf retreating. The last wolf was in a violent frenzy and refused to flee (I kept doing morale checks and it kept passing). Eventually they killed this final wolf and continued their journey east into the forests at the foot of the mountains.
That evening, as they camped in a clearing around a fire, they heard padded feet scamper about them and deep guttural growling. Darian climbed a tree and reported back to his comrades that he saw large shapes darting between trees and bushes around their camp. Eventually two dire wolves appeared. Rodigan and Brishoff grabbed some burning logs from the fire to be used as torches and weapons with the hope that the fire would fend these large 9 foot long beasts off.
One dire wolf attempted to push the tree over that Darian the thief was in with it's strength. Darian attempted to pelt it with poisoned daggers and arrows. Meanwhile Brishoff and Rodigan through a ring of firewood around the camp hoping to have some added protection from the dire wolves. Together, and with the help of cover fire from the trees, they put the dire wolves down too. Rodigan killed one wolf by shoving a flaming torch down the maw of one beast and then loping its head off with his long sword.
The rest of the evening was uneventful and the next day of travel was lovely sunny weather (it is my world's equivalent of June in game right now). They camped for the second night with no issue as well. The next day was more sporadic showers but uneventful. Towards the end of the day they arrived at a massive carved façade in the side of the mountain. It was ornate like where the holy grail was hidden in Indiana Jones and the Last Crusade with two large iron doors. Darian the thief checked the door for traps and realized it was unlocked. He pushed open the door and it creaked and squalled due to how old it was. Ahead of him, Darian could see a door cracked within. The area was lit with sconces and it looked like this was not an abandoned lair. From the cracked door, Darian could see light and shadows flicker about. After the loud creak of the door, he could hear two raspy voices go, "What was that?!"
And that is where we ended that session. On a cliff hanger. It's looking like we will play again this coming Thursday so perhaps we will see what will come about for our adventurers in the lair of a Vampire.
Labels: B/X Basic Fantasy RPG BECMI campaign journal campaign reports D&D DnD dungeons Dungeons and Dragons Old School Old School Renaissance Old School Retro Old School Revival OSR