Basic Fantasy RPG Journal #7: The Stronghold of the Elven Vampire

We continue our adventure and the attempted rescue of the princess of Craydon who has apparently been kidnapped by an elven princesses of old who is a vampire. I am running my players through the classic adventure from 1976 called "The Palace of the Vampire Queen". This was the second OD&D adventure ever written. I thought running my players through some D&D history would be fun. I am modifying much of the module to give more of a story and plot hook and change some things to make it make sense. But I think that's how these early dungeons were meant to be used. Make changes to them to fit your game and setting. Because "The Palace of the Vampire Queen" is pretty barebones on info. Really all you get is a little plot hock about a dwarven princess being capture (which I changed to a human one) and a bunch of rooms with traps and monsters in them. But let's get into the adventure. 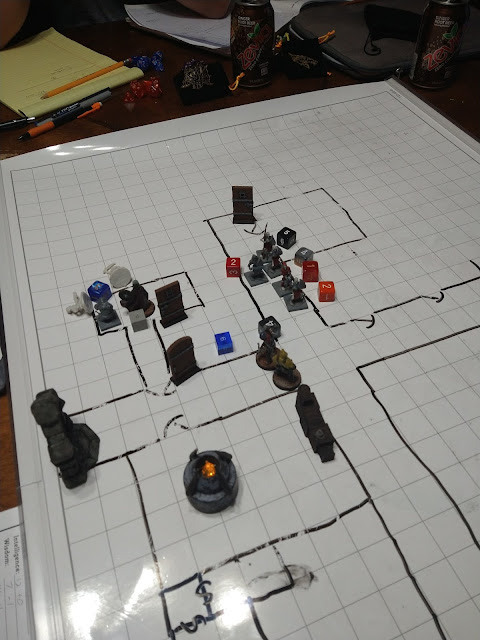 So the party of Brishoff the Dwarven Druid, Darian the Human Thief, and Rodigan the Human Fighter continue. When we last left our scrappy adventurers, they had arrived at the stronghold of the vampire. They had creaked open the door to the stronghold and heard goblin voices within. Darian the thief snuck up to the first door on the right. Within were 4 goblins. 3 goblins were asleep around the fire in a brazier in the room while one was on guard.

Darian attempted to throw a dagger at the goblin on guard through the slightly open door but missed. Instead, the dagger was stuck in the wooden door itself. The goblin gave a yell and 2 of the 3 sleeping goblins woke up. Roll initiative.

Brishoff and Rodigan heard the yells of goblins from inside and rushed in. Darian threw a second dagger (he's a mall ninja and has a ton of daggers on him he just throws at enemies). This time he threw the dagger right between the eyes of the goblin that was on guard. The players rushed the room and dispatched the 3 other goblins rather quickly.

In the room they took some time to search and discovered a secret door. Within was a wounded fighter named Richard who was very happy to see them. He explained that he and his party had entered the lair with the hopes of slaying the vampire and rescuing the princess. They split up to search for her. He hasn't seen his party since then. Meanwhile he discovered a series of secret doors which lead to a rust monster. It damaged his weapon and wounded him and he hid in the secret chamber hoping the goblins wouldn't find him.

The party healed him and gave him a new weapon. They continued to explore by going to the door across from the room the goblins were in. There was a hallway leading to another door. Rodigan kicked the door open, slamming a goblin on the other side to the ground. Within were two more goblins who readied their weapons and attacked. Brishoff, Rodigan, and Richard managed to battle them while Darian wanted to explore more. He went further down the hallway and to the left. There he found a door and opened it. Within were 5 Skeletons who saw him open the door and instantly moved towards him. Darian ran down the hallway back towards his mates with the skeletons in pursuit.

Meanwhile the rest of the party finished dispatching the goblins only to see Darian turn the corner towards them ranting about skeletons. The party moved up the hallway to see the 5 skeletons moving down the hallway towards them. Initiative was rolled again.

They party quickly discovered that their edged and piercing weapons were not very effective but they continued to hammer away at the skeletons. Defeating a few (the skeletons were only taking half damage from their weapons). I rolled 2 critical hits at max damage against Rodigan in a row. My house rule with crits is that the damage rolled is doubled. This brought Rodigan down to 1 hit point and forced him to move to the back of the combat line. Brishoff hit him with a cure light wounds spell and Rodigan downed two potions in order to jump back into the fight. Meanwhile Darian was doing acrobatics around the skeletons attempting to take them out. But his daggers, again, only did have damage. Eventually the party defeated the skeletons but everyone had sustain a decent amount of damage. Richard mentioned that a mile down the mountain his party had made a camp. He said it was safe and nothing harassed them there while they camped before they infiltrated the lair.

The party elected to retreat to this campsite and lick their wounds before returning. They camped for about 3 days. They found some wild game (Darian snagged a deer) and some curative herbs which accelerated their natural healing rate. After three days the party entered the lair once more. Inside they found more dead goblins in the first room they entered. They had left the secret door open and another goblin must have opened the others because the rust monsters out and feasting on the metal items in the room. Rodigan slowly closed the door. They went back into the the other room with goblins and found a secret entrance that could be open from both sides. It was lucky because Richard heard footprints coming and voices. The party piled into the dark of the secret entrance and found a twisting path of corridors. One led to a another secret door where inside was a corpse and 6 bags of rations. Each bag had a weeks worth of dry rations in them. Brishoff did not trust them and inspected the rations and determined that one bag was off (it was actually poisoned). They continued in another direction in the twisting turns of the secrete dark passages and found a door. Darian heard more goblin voices within.

Brishoff kicked the door in and they surprised the goblins that were inside some kind of armor. They were organizing various weapons within. We left off here and will resume the next session with a combat encounter with more goblins.

We had a lot of fun. Darian running into skeletons which lead to some critical hits on Rodigan was pretty hilarious in my opinion. I'm looking forward to what happens next!