This is the continuing adventures of my solo gaming in order to explore the world and setting I created for my own players in our BFRPG game. For my solo gaming, I'm using the Rules Cyclopedia. I am currently adventuring with a level 1 cleric named Aldric (since Warwick my fighter died a days travel from his village).
When last I left Aldric the Cleric of Sunon, he had helped a public official from Ironhaven get back into the city of Whitebridge. That official was named Hephorus. Hephorus was impressed with Aldric and asked him to accompany him into some catacombs under the city. He explained that he was being extorted by someone who had sensitive information on him. Aldric agreed to help him. 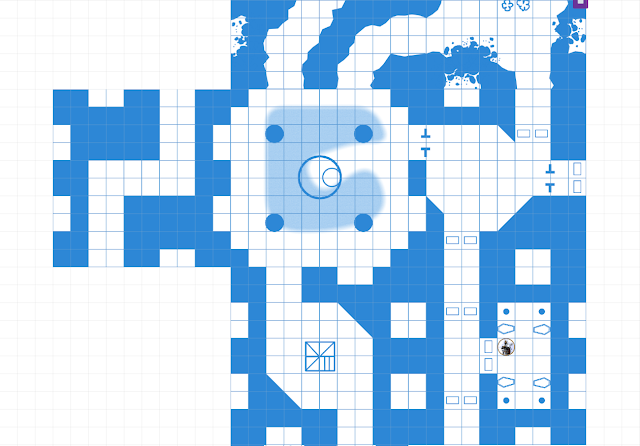 So the two of them ventured into the catacombs (I used my blue dungeon generator to make a dungeon as Aldric and Hephorus moved through it). They became lost but eventually found their way without too much trouble into an old tomb. Within the tomb were three vicious looking ruffians. Aldric, kept the ruffians neutral in response with a good reaction roll. The thugs explained that a merchant here in Whitebridge by the name of Eadwig Wembleye had evidence of Hephorus's indiscretions. In exchange for the evidence, Eadwig demanded that he receive monopolistic privileges for his goods in Ironhaven where Hephorus has some political power.
"I don't have the power to grant this," Hephorus whispered to Aldric.
Aldric then, through a series of reaction rolls, convinced the thugs to hand over the evidence to Hephorus. "I am a Cleric to the holy order of Sunon," he explained. "It would be against my honor to allow this continued blackmail. Hand over the evidence and tell Eadwig that what he requests is not possible. If you deny this command of the holy church which I give you, you will face me. I will have Hephorus return to my order and he will tell them how Eadwig had a cleric murdered in cold blood." With that he gestured for Hephorus to make his way back out of the crypt and towards the exit. The thugs, maybe being some what pious or intimidated, agreed to hand over the evidence without violence. Both parties left the crypt to their separate ways.
On the way out, Aldric and Hephorus encountered a cave locust. Aldric's sharp eyes spotted it before they got too close. The locust jumped away from them and they continued to the surface and the streets of Whitebridge. Hephorus thanked Aldric by paying him 100gp (which Aldric will probably give to his order). Aldric warned Hephorus to stop his sinful ways as it clearly gets him into trouble. Hephorus agreed and departed.
I'm interested to see what happens next with Aldric and I feel like I have some NPCs in Eadwig as local enemy for my players should they ever come this way to Whitebridge. Though now he (Eadwig) may want to deal with the Cleric that threw a wrench in his plans.
Labels: B/X BECMI campaign journal campaign reports DnD Dungeons and Dragons Old School Retro Old School Revival OSR Pen and Paper Roleplaying Games RPG TTRPG