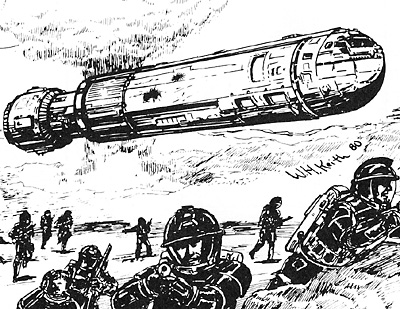 We once again had another game of Classic Traveller on the Guilded server. The adventures of the mercenaries on the Imperial ship the SS Gavin once again occurred. And oh boy was it a tough mission that went sideways very quickly. I used an adventure written by a member of the server which you can get here called "Hogarth's Heroes".

The players traveled on a destroyer called "The Falcons-Blade" along with "The Deft Lance" and "The Tailor-Band". They were going to the planet of Melock in order to help the knight who had this planet as his fiefdom. The knight's younger brother was attempting to lead a military coup of defected soldiers and mercenaries against his older brother for control of the planet. The younger brother was operating out of a small town called "Newpark." The PCs were tasked with going planet side, setting up a blind, and directing ortillary. They were to use a laser target painter on military targets in the town so that the Tailor-Band could direct the ordinance on target.

The PCs did not have the ortillary skill so I gave them a few NPCs with this skill so that they could perform this part of the mission. The squad did a fantastic job of directing the strikes from orbit. A vehicle that looked to be a survey crew drove past their blind and may or may not have seen them. The vehicle fled the moment orbital strikes began to occur. There were no civilian casualties or missed strikes. Once the last strike hit, the players were ready to head back to the ships, mission accomplished right?

The PCs saw two giant flashes of light in the sky. Communications with the Tailor-Band and the Deft Lance were just static. Coming from the West towards Newpark, the players saw 5 APCs and 2 armored vehicles head towards the town. Eventually someone from the Falcons-Blade contacted them. The PCs were informed that once the strikes were completed, destroyers surprised them and destroyed the Tailor-Band and the Deft Lance in orbit. Only the Falcons-Blade could get away. The Falcons-Blade was ready to pick them up at a new extraction point about 4 miles south of Newpark. Unfortunately the soldiers in the APCs and the armored vehicles intercepted the radio transmission from the Falcons-Blade. A man with binoculars exited an APC and started to scan the hillside the PCs were hunkering down in.

Captain Raylan Gibbs (Lordmatteus) stood up from the blind and fired a round at the vehicles to get their attention. The plan was to have Shane (Viktor) and William (Matt) flee towards some woods to the southwest of them. When the troops would come around to them, they would circle back and head south towards the southern extraction zone. They then realized that south of the woods was another military base and they were about to be pincered in the woods!

The squad decided to hide in the woods and ambush any mercenaries that came towards them. One squad of 12 mercenaries exited an APC while the others stayed back. I should note that the players all selected suppressed weapons. This is important. The PCs gained surprise on the mercenaries in the woods and maintained it (I rolled really bad for the mercenaries and I rolled in the open too). They took out 11 soldiers before surprise was lost. One enemy soldier got one unsuppressed shot off that alerted the rest of the mercenaries. The PCs snuck past the military outpost and maintained stealthy movement towards the extraction zone. They arrived at the extraction zone and received massive cover fire from the Falcons-Blade as ropes were thrown out the back. The players climbed up the rope and watched as the Falcons-Blade leveled some hate on the APCs.

The PCs made it to the SS Gavin (their home base) and breathed a sigh of relief. As a reward the received a bonus in credits and a personal hud device they could install in a helmet, a pair of goggles, glasses, or a monocle. It was a fun game. I'm still not that great at narrating in Classic Traveller as we are all still getting a grasp on the system. But we are having fun (I think). More to come soon.