So last week on Thursday we played our Basic Fantasy/Rules Cyclopedia mash up. It was a good time. I attempted to get side initiative going for this session but I don't think my players cared much for it. Maybe for larger mobs of enemies next time but for now, individual initiative on a d6 will probably be what we stick with (which is Basic Fantasy rules as written).

Also a side note, for those that may be wondering: I am in fact running my players through "The Palace of the Vampire Queen" which was the second ever published adventure for OD&D. So far this VERY old school adventure has been fun. It's very maze like in the lair with many secret doors. Now my players are searching every wall for a brick or level or something that will activate a secret door. It's hilarious. After we complete this module, I plan on reviewing it on my Youtube channel (which you should go subscribe to, help me get to 1k subs). Regardless of initiative stuff, the players continued their delve into the lair of the Vampiress who has apparently captured the princess of Craydon (a city in my homebrew setting). It's funny because we played for a while but not much happened in our last session. Much of it was dealing with random encounters, combat, and doubling back over places and setting a watch as the party rested in a secret area. Random encounters have kept the party on their toes I think and this is compounded by the desire to slow down and look for secrets. I really love this aspect of old school play of moving against the clock (random encounters) but not wanting to miss something.

Anyways, the party was about to enter combat with a few goblins in a secret passage. The party made short work of the filthy little guys. They then exited the winding area that was hidden behind some secret doors. Once they exited, they heard a distraught voice called the name of "Richard" down the hall out of the room.

Richard is the name of an NPC fighter character the party has allied with and rescued in the lair of the vampire. Richard was seperated from his party and was not sure if any of them were still alive. Hearing the voice, Richard recognize the voice of Aldaric, the Cleric of his party. Coming out to the hallway they saw a badly injured and bleeding cleric.

"I've burned all of my spells and wounded, I'm so glad to have found you," Aldaric said.

A note about this encounter. Running into Aldaric was not something I planned. I rolled on a random encounter table and "NPC" came up. I thought having a Cleric would be useful to the party and that reuniting Richard with members of his former party would be cool.

The party then elected to bring Aldaric back into the series of winding hallways in the secret area and close the door behind them. They elected to camp in the dungeon over night to allow Aldaric to regain a hit point as well as his spells. 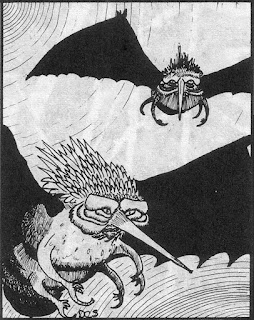 During the night however, the leathery flapping wings were heard on the 3rd watch which belonged to Rodigan the Fighter. Peaking around the corner, Rodigan saw rather large creatures flying about and clinging to the ceiling (these were stirges). Rodigan quietly awoke the party and informed them of the situation. The stirges had not noticed the party in their little hiding spot, the party elected to continue to rest with the person on watch making sure the stirges didn't find them out.

I rolled to determine during each watch if the sturges could find them and rolled poorly. The stirges remained unaware during the night. As morning came (you wouldn't be able to tell in the dark of the dungeon), the stirges declined in number but still hovered about the ceiling.

Aldaric prayed and used two cure light wound spells on himself to bring him to a reasonable level of hit points. This immediately burned through his spells and spell slots.

The party then inched their way into the hallway with the stirges and decided to just make a run for it. Brishoff the Dwarf was in front and just ran for the secret door, making his way into the next room. The rest of the party became stuck in the hallway fending off the stirges. Rodigan killed 1 pretty quickly. It exploded like a water balloon full of blood. Another stirge managed to attack Richard and stuck on him, sucking his blood through his neck. Rodigan grabbed the greater and yanked it off of Richards neck. The stirge began to squirm and peck at Rodigan. Rodigan then tried to attack it with his free hand but it was just too wild. Rodigan elected to just throw the stirge against the wall of the dungeon with a giant red and squishy splat. The party, after fending off a few more stirges, made their way through the secret door and closed it behind them.

They then elected to investigate down a hallway and opened a door. Within were two giant rats that immediately spotted the party and began to hiss and prepare for attack. "It's my time to shine," Brishoff the dwarf said. He is a druid (odd for a dwarf but I let him run with it). Brishoff used his ability to befriend animals and was actually able to befriend both. Both rats immediately began to become friendly. They licked Brishoff's face like dogs (which disgusted the rest of the party but Brishoff loved it). Now the party has two giant rats, 2 NPCs from a previous failed adventurer party, and a whole lot of dungeon left to explore if they want to save the princess.

Thanks for reading. If you like what I do, please check out my SubscribeStar as well as my DTRPG page and itch.io page as well. More play reports to come. Tomorrow we play again so we'll see what happens!