This afternoon we are playing more Atomic Punk 2160 so I wanted to get the play report for last week's game done quickly. I'm almost wondering if I should do recaps as videos as I think that would be faster and easier but oh well. 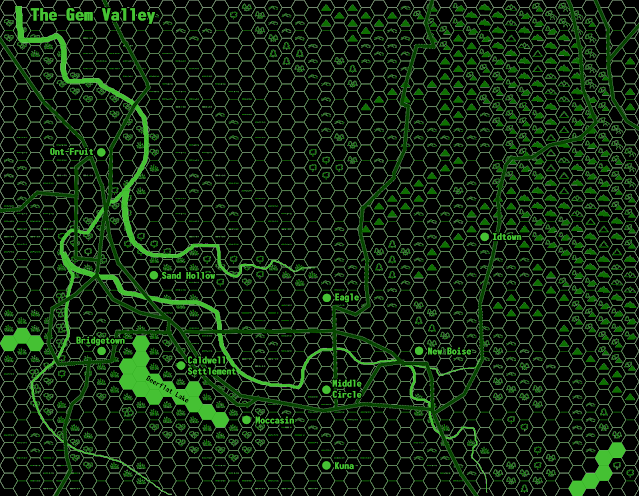 Above is the new play map I made which I also shared on twitter. It's a post apocalyptic map of the Treasure Valley here in Idaho where I live. So far, 5 days have passed in game. 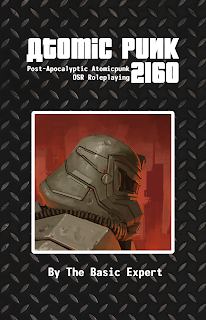 When we last left the characters, they had departed from the town of Sand Hollow to investigate where these supposed water filters for the town might be. This time, town mayor Randall Clunk arrived with a Robot Gunslinger Hitman named BCB #13 (played by Matt Barninger). The party, feeling confident that a robot was willing to join them, traveled north on the highway towards the mantis encounter. No further random encounters with mantises occurred.
The group this time consisted of "Atomic" Ansen (Victor Gorchev) who is a mercenary, "Big" Billy Mack (LikelyArrow) who is a bastard knave (sneaky thief like character), BCB #13 (Matt Barninger) who is a robotic gunslinger hitman, and Kaiden Bloodbug (Grumbler) who is a Smuggler.
The party followed the off ramp from the highway, weaving their way through derelict cars and other debris. Eventually they arrived at an industrial park. In the center of the industrial park was hill and on top of that will was a dilapidated sign for "Bunker Tech".
"I think we found a bunker, boys," Billy said.
By the time the group found the bunker, it was evening. Not wanting to enter a bunker at night, the party camped in the ruins surrounding the hill. No random encounters occurred (rolling terribly and in the player's favor was a common theme this session). In the morning, the group followed a small road that wound around the base of the hill. The party followed it to the right around the hill for about 800 meters before finding the entrance to the vault. Within, the party could see flickering lights in the "abandoned" bunker.
Entering, rats crawled along the floor and dead bodies of varying levels of decomposition laid strewn about. Just after entering the bunker, the party entered a "T" intersection. On all sides, large Atomic Roaches crawled out from the broken floor and attacked the characters. Billy went down, bleeding out on the floor. Billy was revived by the Robot, but he had to perform a saving throw for being nearly killed. He failed his save which meant that he had to reduce a random attribute score by 1. I believe it was Strength that was reduced by 1. This is to simulate a permanent injury.
Moving ahead into another room, Billy, wounded, turned on his flashlight. They found a room with sandbags facing towards the entrance. Dead bodies all around. Moving further into the next few rooms, a terminal was found. BCB #13 used his science skills to hack the computer console. The party learned that this was a show model before the bombs fell but was then used as a bunker where people lived. They further learned that on the second level, sketchy experiments were performed but the details were not disclosed on the files at this terminal.
In this room, some feral revenants came out, 3 to be exact. Billy was once again knocked down and bleeding out. The party killed two revenants while another ran down towards some stairs. Once again, BCB #13 resuscitated Billy who once again had to make a saving throw. He failed and reduced another random attribute by 1 to show another permanent injury. The party searched a few crates around the area and found some pop caps and medicine, but no filters. Billy's portion of the loot was enough for him to level up to level 2. With Billy injured, and some decent loot found, the party elected to head back to Sand Hollow to recover. And that is where the session ended.

All in all it was quite fun. I think some old school gamers might not like that I don't do death at 0. But as you can see by Billy, the character is punished with reduced attribute scores every time he goes down and starts bleeding out. The game is almost ready for release. I had to make some corrections on DTRPG to the print version which meant a new proof needed to be ordered. So once this new proof comes in, the book will be available on DTRPG (PDF and print), Big Geek Emporium (PDF only), Itch.io (PDF only), my SubscribeStar and Guilded server for supporters (in PDF only), and on Lulu (print only). So you will have a great many places where you can check out the book. Well I have to prep for today's session so I will have more to report after that.
Labels: B/X Basic Fantasy RPG BECMI D&D fallout Old School Renaissance Old School Retro Old School Revival OSR Pen and Paper Roleplaying Games post-apocalyptic scifi Tabletop RPG TTRPG