The Allure of the New vs. The Longevity of your Game 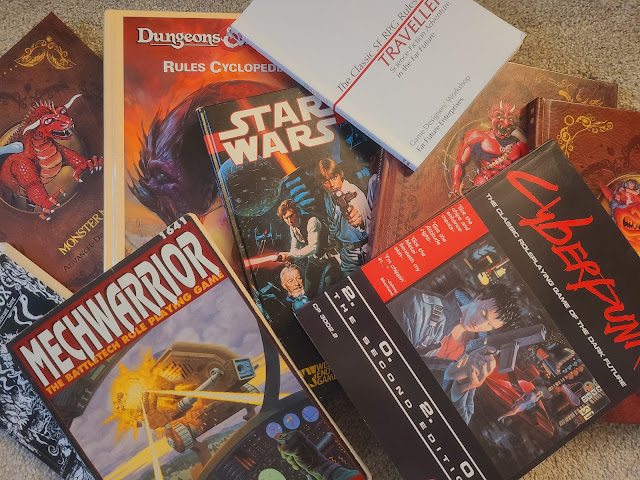 A common problem for GMs is that we often become collectors of games and systems. Traditionally, we as Game Masters are the primary target of publishers and RPG creators because, compared to players, we purchase the vast majority of gaming tools and aids for our tables. This can come in the form of miniatures, VTT modules, addons, sourcebooks, adventure modules, dice, battle maps, and any other new or interesting tool we find interesting.

If you are like me, one of the biggest things is just buying new games. When I first left the 5th edition, I sort of went on a spending spree trying to find every and any game that interested me. I made a few purchases I regret and some games I will probably never play. While undesirable, this is quite common in a lot of ways. Especially within the OSR. You eventually realize you have to be pickier with your OSR purchases otherwise you end up purchasing BX or AD&D over and over again with the only difference being prose and some homebrew rule variants.

One thing that happens is that you, as a GM, start to become tempted to switch campaign settings or game systems while your current game is happening and potentially still very fruitful and healthy. Everyone, including yourself, is having a great time every week or every other week when the gang meets up to play.

The problem is that we as GMs look on our bookshelves and see that one book, that one game we just purchased. We read it, it got us really excited, and now we want to run that game. The current game isn't bad, but this game is NEW!

The problem I observe is that most people cannot fully understand the complete and total potential for fun and immersion a TTRPG can have until a long-running campaign is done. I mean that the same game world has persisted for several years and players, whether they drop in or out, can see the actions of their characters affect the game world in the long run. Jumping from game system to game system or campaign setting to setting is obviously not conducive to running a long-term campaign.

My current Rules Cyclopedia/Basic Fantasy RPG game will have its one-year "birthday" at the end of January 2023. We probably have 30 or so game sessions logged with the characters being around levels three and four. We are having a lot of fun. The players want to start businesses and I take that as a cue that I am doing SOMETHING right for their desire to interact with the world I'm the arbiter of.

However, like most GMs, the temptation of other games is always trying to seduce me. Or some setting is as well. I feel like I have matured a lot in my tastes and perspectives on gaming over the years, and I understand the allure of the "new thing." I understand though that BFRPG and the Rules Cyclopedia also had me excited at some point. That is why I chose to run the game in the first place. Why is that excitement gone if I am feeling that way?

Often I sit and think about what attracted me to the current game and setting I am running. Doing so helps to rekindle that excitement I felt and can help keep the current campaign feel fresh for me once again. Talking to a lot of different people on my Guilded server (which if you like free speech and OSR games you should join), there are two ways to combat the allure of new games and settings.

The first is to keep your eyes fixed on the prize and exercise self-control. I give this advice as someone who makes games too. Such advice is probably not good for my bottom line, but I care more for the health of the hobby at the end of the day. The health of the hobby allows the work that I do to thrive even more. GMs should focus on the prize. As your campaign matures and your sessions get into the double and triple digits, you will see what I am talking about. You will see the full potential for fun and immersion that can happen with a tabletop roleplaying game.

The second option is to give in but in moderation. Think of your current campaign as a good home-cooked meal. Such meals are generally better for you than eating out (and less expensive). But even these home-cooked meals can become tiresome and bland. It is a nice treat to eat out on a Friday night and let someone else cook or try something new you just can't eat at home.

One-shots in the system that is tempting you are good for this.

This bit of advice takes a level of self-control and discipline. A GM that lacks self-control may be tempted to abandon the current campaign even more! One way that I have utilized this is to run one-shots on nights when a good portion of the adventuring party can't make it to game night but those that can, still want to game. When this occurs, I get out Classic Traveller or Call of Cthulhu and run a simple one-shot adventure for just that night.

I personally find that this scratches that itch. In fact, I kind of find myself missing the main campaign that night. Running a one-shot in another system or setting that night acts as "eating out" from the "home-cooked meal" of my main campaign.

Regardless of what you choose, I want to encourage you and everyone else to stick to the game you started. Your campaign will mature and will become something awesome if you and your players can stick to it. If the game is getting stale, you have to really ask yourself what could be causing that? Are the guys sort of getting tired of your megadungeon? Maybe they are tired of going from room to room kicking in doors. Do something to shake things up and make it exciting for them and for you.

The statistic that most 5e games, for example, only last about six sessions really makes me sad. Mostly because these playgroups do not see the full potential of the hobby. They are missing out because their "campaigns" restart every month or so. Campaigns that always die and never have a solid conclusion are not good nor is it sustainable for the hobby. So please, get picky with the games you buy and the settings you run. Be disciplined. And if you feel like your current game is becoming lackluster, ask yourself why that is and see if there is anything you can do to rekindle that excitement you obviously felt right before session 1.